A fabulous photo – can you help recognise anyone? 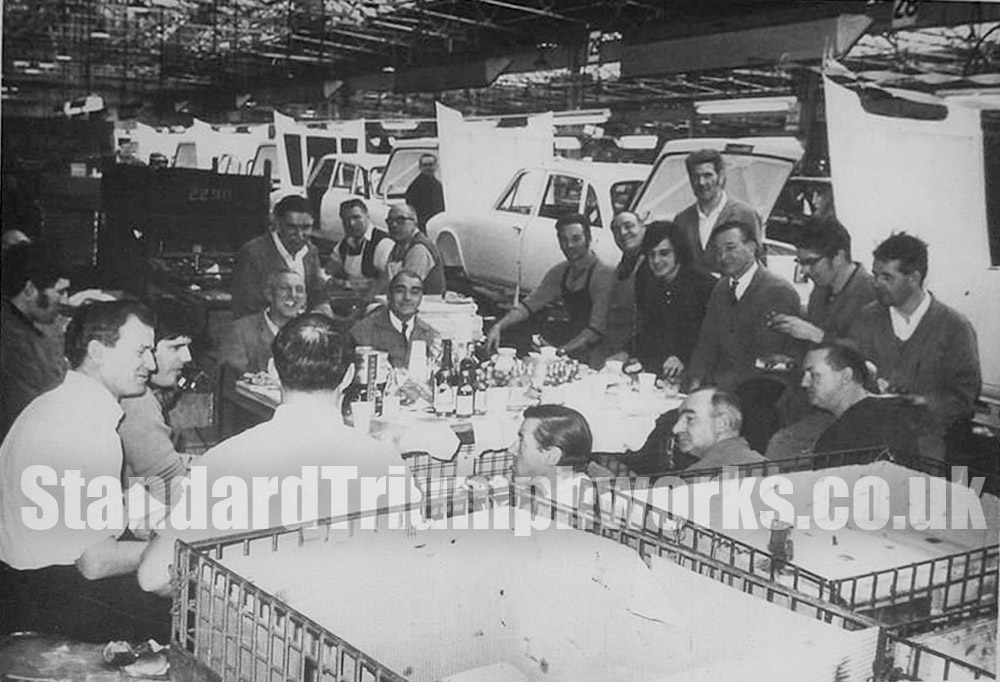 My cousin sent me this photo in the mistaken belief that I appear in the bottom left corner. Although I am not in it I can be certain that it was taken at the side of the middle (Barb) track. It looks like it was at one of the many impromptu Christmas parties that took place during the last shift before the Christmas break. Perhaps some of the people in the photo could shed more light on it?
Terry Donnelly (former maintenance electrician Canley.)

Terry adds:
Do you remember the good old days when we had two days off at Christmas,
unless it fell at the weekend? New years day was not a public holiday either so you had to work or lose your holiday pay.

I remember one particular new year vividly for all the wrong reasons. I was working the night shift on the top floor of the rocket range and at about 11.15 I got a call to say that the mansaver had broken down (one of twin hoists that lowered the bodies onto the Herald track.)

When I got to the drop the hoist was down on the track with a multi core cable hanging loose. The cable would go up and down being controlled by a spring loaded drum. Obviously the spring had broken. The hoist had to be brought up by hand and set at the side of the drop so that the track could be restarted. It was my job to change the drum (yo yo.) I had to climb on top of the hoist which was covered with thick, black grease, fag ends and other debris. Within minutes I was covered with this muck.

Half way through the job a radio sounded the chimes of Big Ben to signal New Year. It was not exactly a good start for my New Year!!