A Visit to the Triumph Works

We headed for Coventry and drove along the Ring Road to the factory of the Standard Motor Company Ltd., where Triumph TR3s are assembled. 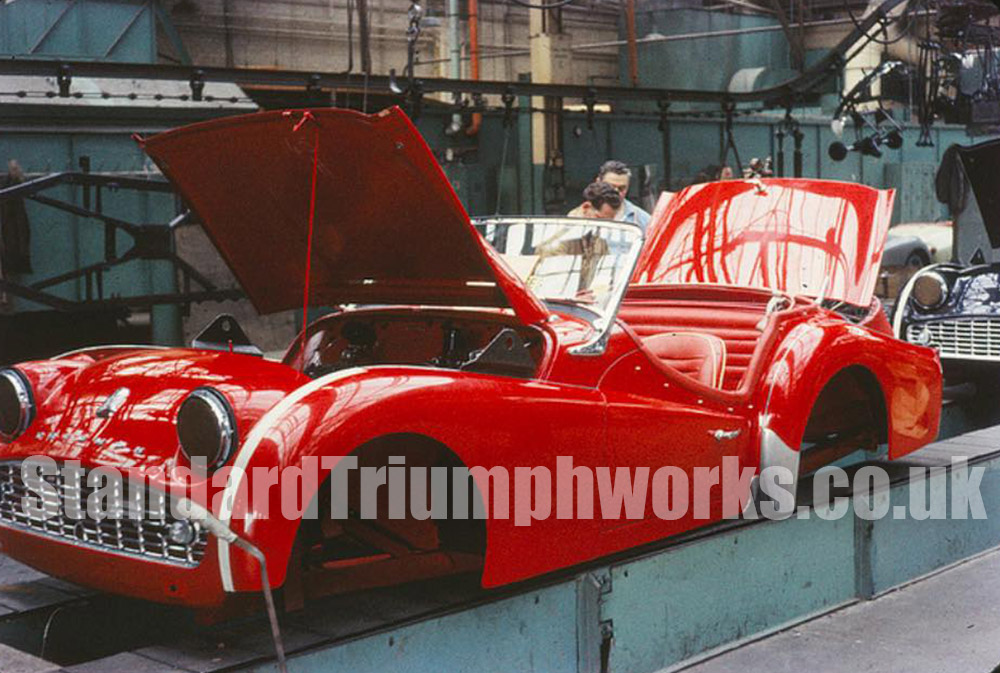 Here we were royally entertained by Mr. I. J. Penrice, the Publicity Manager, and Jack Croft, the Press Officer. However, duty before pleasure and prior to a memorable lunch we were shown the TR3 assembly line by a young apprentice. A single conveyor line, moving at perhaps an inch every second, is in operation for the production of Triumph TR3 sports models, that brilliantly-conceived car evolved after the war from Standard Eight and Vanguard and Triumph Mayflower components, and today, with 2-litre twin-carburetter engine and disc front brakes, one of the finest value-for-money sports cars it is possible to obtain.

The TR3 bodies arrive from Mulliners with their base frame welded-in and complete with seats, screen and upholstery. They are lowered on to the assembly line for the addition of trim, lamps, hood and tonneau cover, sidescreens, etc., after which the grille and nosepiece complete with headlamps is added. Lister trucks motor about bringing supplies to the line, on which an occasional Standard pick-up truck mingles with the sports cars. Standard now make the hoods, sidescreens and tonneau covers themselves, beside the assembly line, employing the inevitable Singer sewing machines.

The TR3 has a separate chassis, which is assembled on a line at right-angles to the body finishing line. As a completed body arrives at the end of its line the entire line is automatically stopped; when a chassis is ready the body is lifted by overhead crane and planted on a wheeled trolley, after which the body line re-commences its slow movement. The body is then wheeled to meet its chassis and the cars now move slowly at knee-height on a chain-conveyor, and engine, suspension units, axles, wheels, etc., brought to the right place by overhead conveyors, are fitted by hand. Axles arrive from Banner Lane, and the Girling disc brakes come as units complete with hubs of both bolt-on and centre-lock type.

After the engine and axles have been fitted each chassis is spray-painted. Engines are brought from the engine assembly-shop on 5-cwt, overhead hoists, rather as money used to be shot in hanging boxes about old-fashioned draper’s shops.

As the completed cars near the end of the line the wheel nuts are tightened with pneumatic braces, oil and petrol are added through the appropriate orifices and each Triumph TR3 goes for a road-test of some 20 miles before coming into the checking shop, where any blemishes in finish, and mechanical defects, are eradicated. 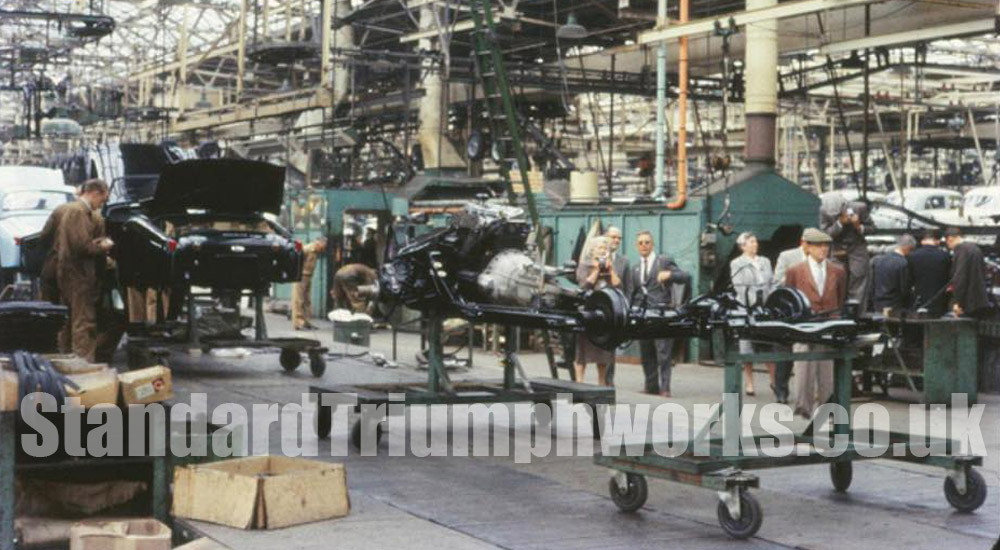 All component parts are fed to the assembly conveyors from one store-room and as they meet the production line they are fitted by mechanics using automatic screwdrivers and braces, the four back-axle mounting nuts, for example, being tightened with one such tool in a single application.

Engines for Vanguard and TR3 are line-assembled, those intended for the sports car having a large “TR3” marked on the crankcase, so that the correct twin-S.U. manifold shall be fitted when that stage is reached. Gearboxes are fitted to the TR3 engines on the assembly line but not to the Vanguard engines, as in this case the gearbox is run-in before being mated to the engine. This is unnecessary in the case of the TR3 because each power unit is bench-run, whereas Vanguard engines are mounted, up to ten at a time, on a circular bench and motored electrically for 20 minutes. Each TR3 engine is run on a Heenan & Froude brake, of which 28 are available, for about three-quarters of an hour at progressively increasing speed, and any engine that does not develop 74 b.h.p. or reach 3.500 r.p.m. in this comparatively stiff condition is rejected.

The Standard factory is working a 5-day week, with a night-shift for tractor assembly. Their average daily output is 190 Eights and Tens, 40 Vanguards and Vanguard Sportsmen, 45 TR3s and 290 Ferguson tractors, adding up to a total weekly output of 2,825 vehicles, or a daily automobile output of 275. It is interesting that Triumph TR3 sports cars are now produced in greater numbers than the Vanguard Ill saloons; however, large stocks of the latter were standing, a dingy sight where soot had settled on the weather-preservative, in fields outside the factory buildings. So popular is the TR3, particularly in America, that 90 per cent. of the output is exported and there is now a three-month delivery delay in this country.

Successful participation in competition events has helped to bring about this popularity and it was nice to encounter in the factory posters proclaiming the first, and second placings in their class of TR3s in the very-recent Sebring race. The Triumph TR Owners’ Club, originated by Mr. Penrice, is an excellent means of concentrating enthusiasm as well as spreading “know-how” about these cars, and Jack Croft, who drove us to lunch in a Vanguard Sportsman, was leaving for Brussels at the end of the week to lead the second Triumph O.C. Continental tour. 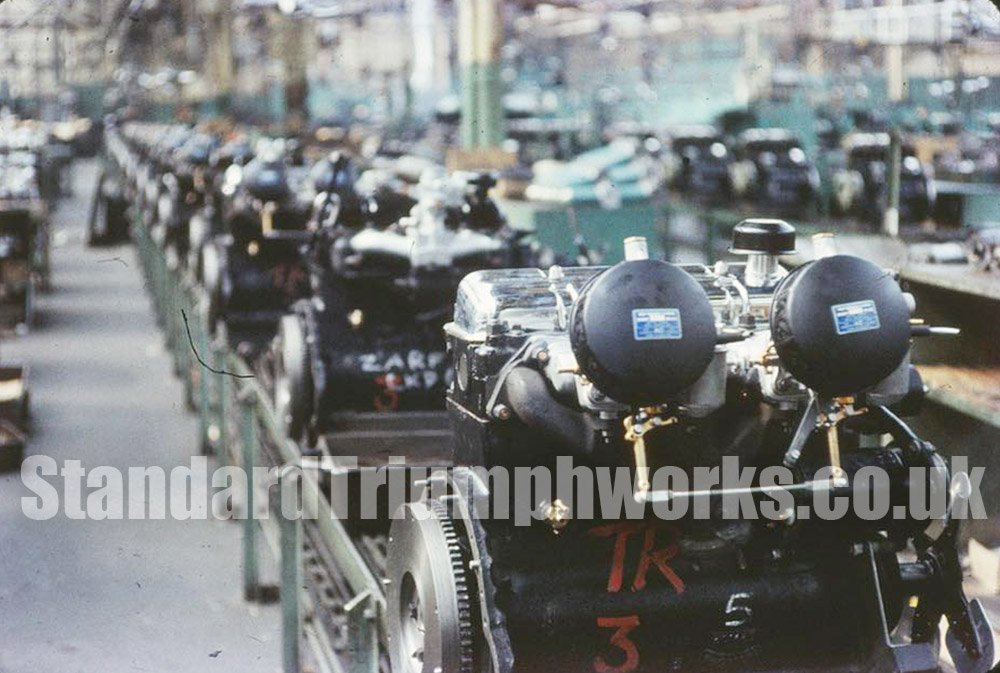 Before lunching in Standard’s own beautiful dining-room we called on Ken Richardson and looked over the Competition Department, which occupies the old Service Department. Richardson has three skilled mechanics to work on rally cars and has on his books eight TR3s and four Standard Tens. The three TR3s for the Tulip Rally were there, in a very tasteful shade of green, and some Tens were awaiting their next assignment. We were told that of the Sebring Triumphs, one had previously done the Rome-Liege-Rome Rally and alI had done the Swedish and Alpine Rallies. Yet, apart from Standard Tens facing the R.A.C. Rally of the Tests, Richardson prefers to enter virtually catalogue motor cars.

At lunch we met Nancy Mitchell, who was at Coventry to make arrangements about the Mille Miglia, in which fantastic race she will drive a TR3 hard-top, after flying back from the Tulip Rally (in which she shares an M.G. with Patsy Burt) with only a day to spare – some assignment, especially as she intends to drive the entire race herself! She was duly photographed with the actual Alpine Rally car she will use in the Mille Miglia, and which is unlikely, we gather, to depart very far from normal specification, although racing Ferodo pads will naturally be used for the disc brakes and a 25-gallon fuel tank with quick-action filler, a 4.1-to-1 back-axle ratio and Le Mans reflectors in the headlamps will be fitted.

Before we left the home of the TR3 we were able to enjoy a brief drive in one of these accelerative 100-b.h.p. motor cars. This one went readily to a speedometer 160 k.p.h. and we experienced again the pleasure of using the rigid remote gear-lever and “fly-off” handbrake and found the fade-free and powerful disc front brakes a very worth-while feature of the car. The overdrive is impressive, too, functioning as it does on the three upper gear ratios, giving seven forward speeds. The Triumph engineers are to be congratulated on pioneering the use of disc brakes on a low-priced sports car and, while their competitors are undoubtedly considering following suit, by the time such brakes become commonplace on the front wheels of other fast cars it is possible they will be found on all four wheels of the Triumph. As with B.M.C., Standard/Triumph use dispersed factories, components travelling by road to each assembly plant. Castings are obtained away from the Coventry factory.

Reproduced from Motorsport Magazine, May 1957