The Standard Triumph Apprentices Association (STAA) was affiliated to The Coventry Apprentices Association (CAA). Inter company activities with member firms often took place.
I think it was in 1964 that the CAA proposed a bedstead race from London to Coventry as a competition for its members. The STAA of course was up for it! The bedstead had to be made by apprentices. It had to be a single seater with both steering and brakes.

We designed our bedstead using brazed steel tube, pram wheels and bicycle brakes and made it in the maintenance workshops at Radford with permission and encouragement from Ted Prior the supervisor.

In planning the race itself there were certain logistical problems to solve and it had to take place in the early hours of the morning when traffic was light. We obviously couldn’t use the motorway so A5/A45 was the route chosen.

It was decided that it wouldn’t be an actual race as teams trying to overtake each other on a public road would be too dangerous so a timed event was chosen to be run as a relay with a driver and two pushing. Every quarter mile a new team of pushers would take over. I seem to remember there were 6 teams of pushers. We also needed two vehicles, one to drop off new teams along the road and one to pick them up the old ones. We managed to borrow the company bus and an Atlas van.

We had to obtain police permission for each area we passed through. However London police wouldn’t allow us to start at Marble Arch, in the cente of London, as we had planned so we started from Stanmore on the edge.

We met at Canley Pavillion on Saturday evening where Jim Twidale the canteen manager had provided a healthy meal of steak and salad. He had also supplied us with food and drink for the race. We loaded the bedstead onto the Atlas and boarded the bus and set off for a midnight start from Stanmore.

We started, I think, at 15 minute intervals and continued up the A5. The bus dropping pairs off every quarter mile and and the Atlas picking them up after their run. When the bus was empty and the Atlas full they swapped over. It was a bit complicated.

We joined the A45 at Weedon and headed toward Coventry but by now even the Sunday morning traffic was building up and things were getting risky. When we reached Ryton on Dunsmore we could see the three spires of Coventry ahead and the organisers decided to end the event as a race and enter Coventry all together.

What they hadn’t told us was that a reception had been arranged in Broadgate where Jimmy Hill would meet us. Unfortunately starting from Stanmore had knocked about 10 miles off the route so we were too early and if we now continued to Broadgate we would arrive about an hour before Jimmy Hill. So we had to wait, which was a bit of an anticlimax. We eventually arrived in Broadgate and Jimmy Hill congratulated us all for our achievement.

We were all set to repeat the event the following year but were not able to get permission. Plus it was too long and complex and most of us could barely walk for a week after the event! 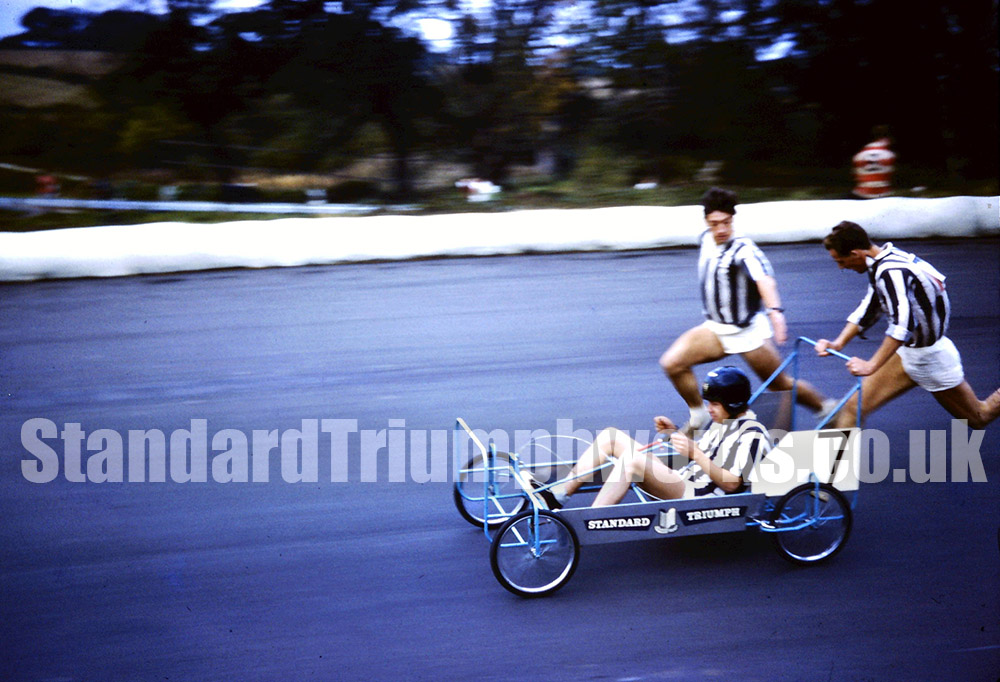 It was decided to run a proper bedstead race on a race track so in 1965 we went to Mallory Park where we ran the race over 5 laps rather than 10 hours. I can’t even remember who won but it wasn’t us.

The picture shows the Mallory Park race. The bedstead is being driven by John Young, an apprentice chef and son of Cyril Young the company Safety Officer. I can’t remember the name of the apprentice pushing but the one about to take over is Alan Pinder apprentice planning engineer.