Yes Standard Triumph had it’s own plane!Registered G-AMPR the plane was a Percival P50 Prince 3E. The operator was the Standard Motor Co, and the plane was based at Baginton. The date of these photos are said to be 1954/55. 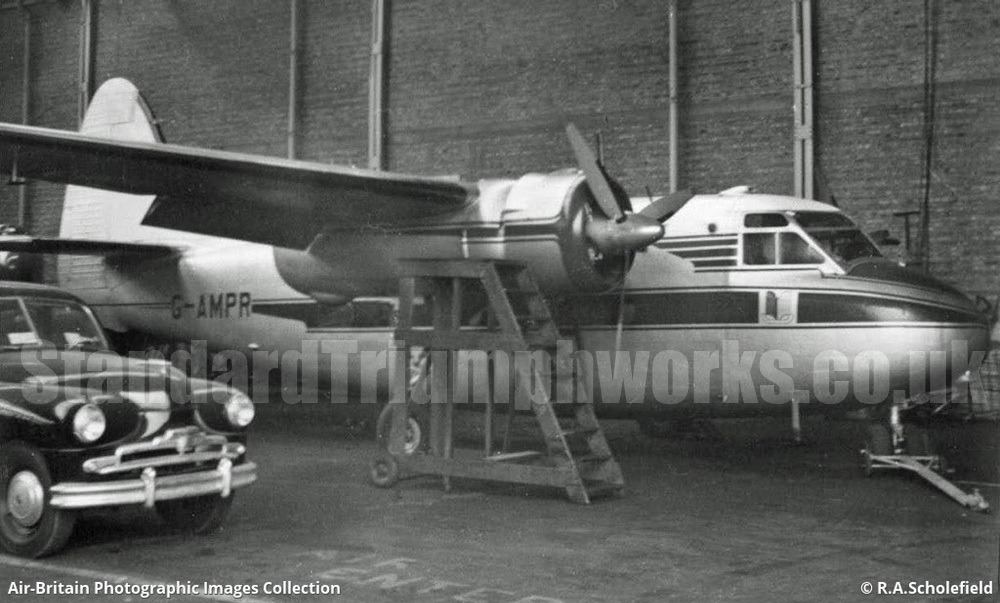 The plane was sold off in February 1956 (re-registered as VR-TBN) to the Tanganyika government.

In 1961, Tanganyika gained its independence from the UK as Tanganyika, a Commonwealth realm. It became a republic a year later but stayed in the Commonwealth of Nations. Tanganyika now forms part of the modern-day sovereign state of Tanzania.

A quick Google also found this:

Pilot’s report on accident to Percival Prince G-AMPR on 6th February 1953.
“The aircraft was required to depart from Stuttgart (Echterdingen Airport) at 12.30 GMT on a flight from Stuttgart to Birmingham with one passenger. The aircraft was brushed clean of snow and the fuel and oil checked, deicing systems of the propeller, airframe, and windscreen were checked during engine run-up as was the pitot head heater. Immediately prior to take-off the aircraft was sprayed with alcohol. The weather at Stuttgart was poor, strato-cumulus base was 2,000ft, visibility normally one mile but dropping to 1,000 yards in snow. Temperature was +2 degrees C.

We were delayed at the end of the runway for 15 mins. whilst the runway was cleared of vehicles. Light snow was falling on take-off at 12.44 GMT. We were instructed to climb to 7,000 ft. by Stuttgart Control and cleared to Rhein-Main Radio Range at Frankfurt via the Modau beacon. During the climb which was made at 2,600 rpm and 31″ hg. the aircraft picked up about 1 to 1.5 inches of glaze ice but the flying surfaces and propellers were kept clear by the deicers, the oil temperatures were kept at 55 degrees C by using the shutters, at no time did the boost pressure drop. This was watched carefully to ensure that the engines were not icing up. We levelled at 7,000 ft. still in cloud, engines were set at 2,200 rpm and 28” hg., but at 13.28 we were out of cloud and were in sunshine. The ice was very slowly clearing although the outside air temperature remained at about -11 degrees C.

It was observed that the fuel gauges were behaving erratically, the port reading remained steady whilst the starboard reading dropped much more quickly than normal. It was decided to rely on timing to gauge consumption… At 15.30 we crossed the Belgian coast and contacted London Airways control requesting a descent clearance to 2,500 ft. after passing Manston. At approximately 15.50 starboard engine stopped momentarily, the booster pumps and crossfeed were switched on, this seemed to cure the trouble but London Airways were informed of our engine trouble and we asked permission to divert to Croydon, this was given and Radar assistance promised. The Stewardess and passenger were told to fasten lap-straps and stop smoking. Shortly afterwards, however, both engines stopped and thereafter, ran for irregular intervals of very short duration. We informed Uxbridge telling them the trouble had become serious and that we would try to land at Manston. Uxbridge said they would alert Manston.

According to our Decca readings we were now about 5 miles off the coast abeam of Manston and losing height rapidly, our engines were by now silent apart from very occasional bursts. We obtained several bearings from Manston and broke cloud overhead at about 700 ft. at right angles to the runway. A steep turn to port was made in an endeavour to land on the aerodrome but due to the fact that the windscreen had become obscured with light rime ice, it was impossible to see ahead. To avoid hitting other aircraft or buildings the aircraft was deliberately “ground-looped” to starboard. The aircraft came to rest just beyond the aerodrome boundary. The time was approximately 16.00.

No-one was hurt in the accident but the aircraft was severely damaged. The nose-wheel had collapsed and the nose of the fuselage buckled. The port wing was  badly twisted as were the port propeller blades.”