We received this email from France and reproduce it in full in the event that anyone can assist in the query.Please apologise the inconvenience this message causes you, but it concerns a historical point that I would like to resolve about the manufacture of Ferguson tractors.

We know that a small number of Ferguson TE, TEA, TEF… tractors were assembled between 1947 and 1952 with pressed aluminium body parts.

As far as I know, these parts are systematically non-load-bearing and concern either the side panels of the bonnet, the grids, the bonnet, the dashboard or the fuel tank. I don’t know of any rear fenders or aluminum seats, for example.

We also know that Ferguson tractors were manufactured at Banner Lane’s shadow factory in Coventry. The plant was built and financed in 1939 by the British Air Ministry on 93,000 square metres and rent to the Standard Motor Company who has had to carry out work “in the shadows” of its skills as an automotive engine manufacturer, parts for 20,000 radial wave jacket engines Hercules VIII type, as a subcontractor for the manufacturer Bristol Aeroplane.

The Standard Motor Company also contributed to manufacturing at its Canley industrial site, which came into service in 1916 and was located in the southwest suburbs of Coventry:
3000 fuselages for Bristol Beaufighter aircraft.
1100 De Havilland Mosquito, mainly the FB VI type.
750 Airspeed Oxfords.
4000 Jeeps and Beaverette light armoured vehicles.

The attribution of the origin of aluminium parts in the bodywork of Ferguson’s tractors is often justified by the state of the British economy at the end of the Second World War, by the appalling winter of 1946-1947, by shortages of raw materials, particularly steel and finally by the rationing implemented by Clément Attlee governement between 1945 and 1951.

There were therefore deficiencies in the supply of steel filled by the use of aluminium plates.

The main issue I would like to resolve is the exact origin of these aluminium plates. It is said on some websites that they would be parts of the cabin of reformed or wrecked aircraft.
No documents, no sources, no evidence are published to support these statements. Nothing exists other than the facts that show that aluminum was used.

It so happens that I have on a TEA tractor, an entire hood cover completely made of aluminium, which is nothing original; but what is unique, I think, is that under the original paint now very worn, you can see in its middle the letters and numbers: BB3 ODQ, of a size near eight millimetres high and large each, over which the Ferguson grey paint was applied in the factory.
This provides a serious indication that this is a reuse of an aluminium sheet, previously used for another purpose, with a marking unrelated to Ferguson. 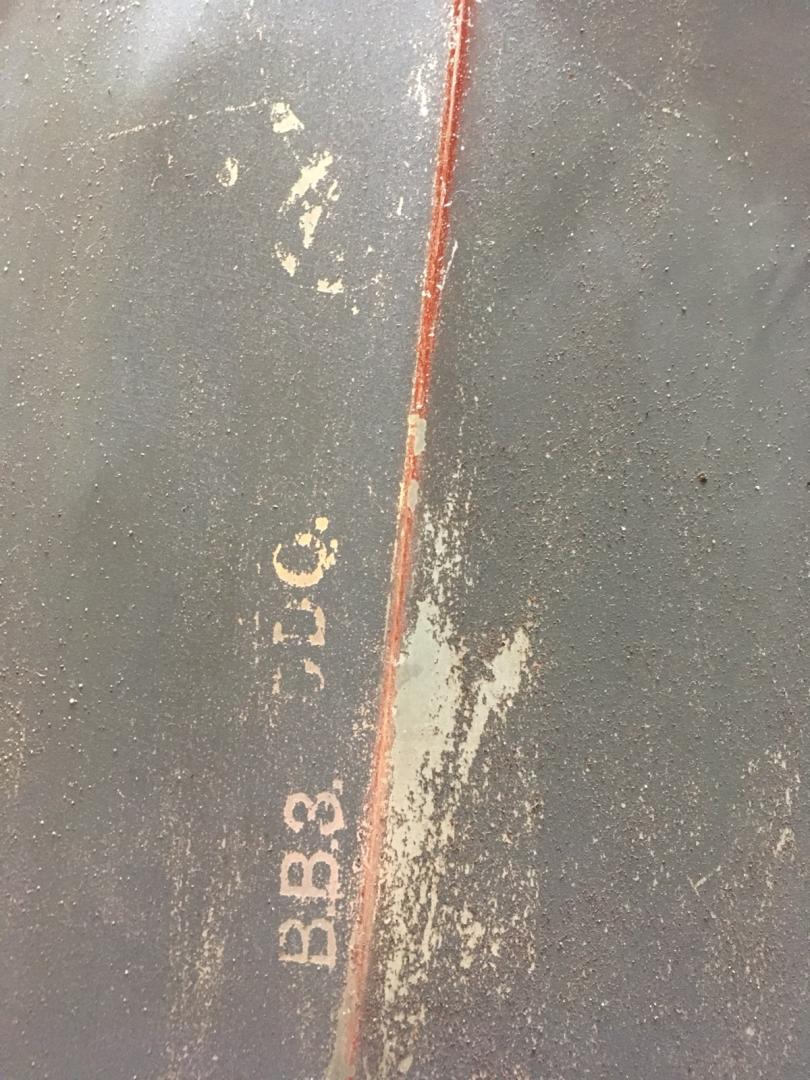 Do you have a specific clue to identify this code ?

Knowing that the Standard Motor Company has manufactured fuselages parts for the Bristol Beaufighter heavy fighter plane in Coventry, could the code B.B 3 have anything to do with this aircraft?
Maybe, the BB.3 code could have a signification for any Bristol plane like the Beaufort, or the Blenheim ones ?

I hope to be able to count on your understanding and help, and I would like to thank you in advance.