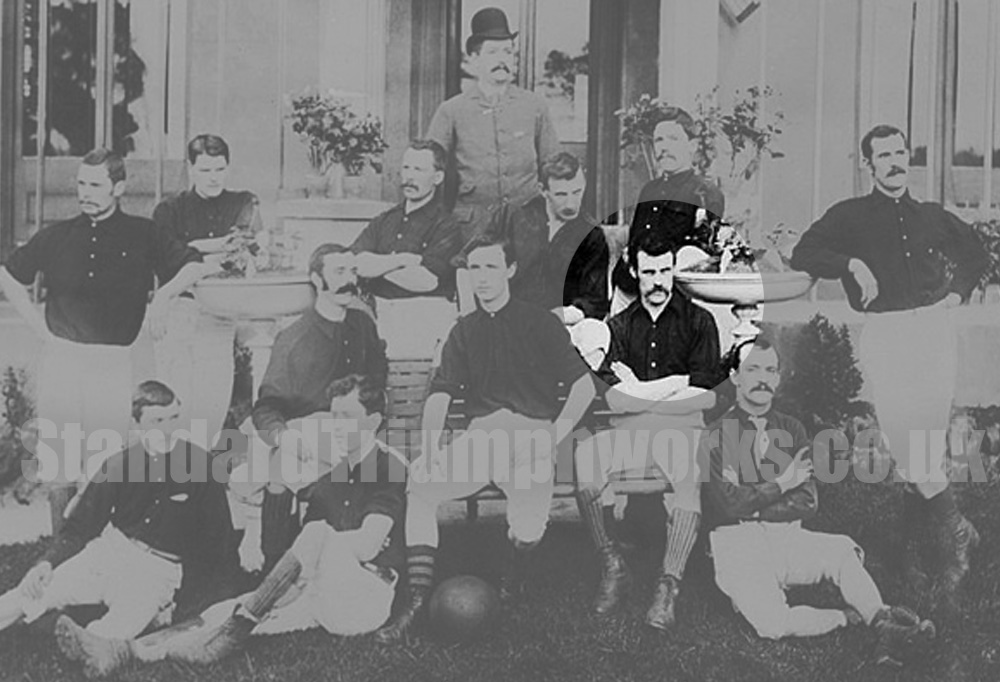 A service was held on Monday 29th April, 2019 at London Road Cemetery Coventry to unveil a brand new headstone in memory of David Danskin, a former Standard Motor Company employee born on January 9th 1863 at Burntisland, Fife, Scotland and who died in Coventry in 1948. By 1886 he was working at the Arsenal Munitions factory in Woolwich and in 1886 along with fellow workers formed a works football team named Dial Square, later renamed Royal Arsenal FC which evolved into Woolwich Arsenal FC and finally became Arsenal FC.

David is acknowledged as being the founder and first captain of Arsenal FC in 1886 and after his playing days were over he moved to Coventry to join the fledgling motor car industry working at Standard. The Friends of London Road Cemetery discovered a few years ago that he lay in an unmarked grave there and Monday’s event was the culmination of a lot of research. Arsenal paid for the headstone and the service was attended by Arsenal legend Pat Rice who was one of a delegation from the Club including the managing director, as well as many fans of Arsenal and Coventry City.

***
Forming a football team was not the only significant thing which David did in 1886. In that year he married his landlady’s daughter, Georgina Harradon, whose family had moved to Woolwich from Plymouth. They had three children, but sadly two of them (David and Sarah) died in infancy. The surviving child was William (known as Billy), who was born in 1892.

By 1901, David had left the munitions factory and established a cycle business (both manufacturing and selling) at 60 Herbert Road, Plumstead, in the Borough of Woolwich. At the 1901 census, he described himself as a Mechanical Engineer, and an employer with his own business. The family lived above the shop. One of David’s activities was the manufacture of cycle frames, and his Scottish origins are reflected in the trade name he chose to market them under – ‘Cushie-doo’, the Scots for wood pigeon, with a picture of a pigeon for the logo.

In 1907, David sold the cycle business and moved to Coventry, where he began work as an examiner with the fledgling Standard Motor Company. He was to remain there for the rest of his working life.

1916 was a year of both sadness and joy. In March, David’s wife Georgina died of emphysema. In June, son Billy married Mary Jones, and the couple went on to have two sons – Geoffrey in 1918, and Neville in 1924.

In 1918, David married again. His new bride was Rosie Clara Richardson, a colleague at the Standard Motor Company. They had three children – Rosie Hilda (known as Hilda) late in 1918, Ellen Bessie (known as Bess) in 1920, and Richard (known as Dick) in 1926. Sadly, all three died during the course of 2008.

The family were relatively well off in the 1920s. Bess recalled that they had a car, which was uncommon at that time.

When Arsenal won the FA Cup in 1936, David’s employers honoured him with a special celebration dinner. Fred Ollier’s reference to David listening to the Cup Final commentary from his sickbed is confirmed by Bess. She says that it was around this time that he began to have serious problems with his legs, probably resulting from injuries in his footballing days. Frequent spells in hospital resulted. During one particular stay in Gulson Road Hospital, Coventry, he was told that he had gangrene in one leg and that it should be amputated. His response: “I’ve got two legs now and if I’m going to die, I’ll die with two legs.” He survived intact!

But the continuing problems with his legs now effectively forced him to retire. He was given a company pension, which was quite substantial at ten shillings a week, and according to Bess was almost unheard of at the time.

In 1940, the family home in North Street, Coventry, was very badly damaged in the blitz, and they had to evacuate immediately. The next day, when they returned, David’s steel trunk, which had been well hidden and which contained all his jerseys, medals, valuables, family photos etc, had been lost.

David was now getting quite old and his health was failing. He needed daily attention at the local hospital in Warwick. Because of this and his lack of mobility, he became an in-patient in 1942 and remained there until his death.

David Danskin died in Warwick on 4 August 1948, aged 85. He is buried in London Road Cemetery in Coventry, beside his first wife, Georgina.