Skip to content
On Saturday, October 4th, a very warm welcome home was given to the employees of The Standard Motor Company Ltd., who have returned from service with the forces. The event, A Welcome Home Party, was held at the Company’s Banner Lane Canteen. 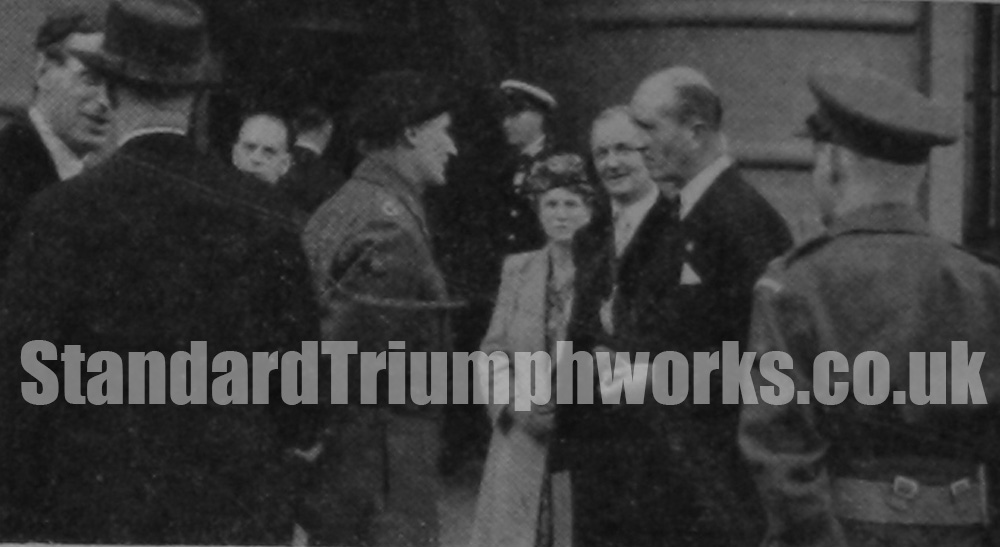 Highlight of the evening was the special visit of Field-Marshal the Viscount Montgomery, K.G., G.C.B., D.S.O., who on arrival was received by Sir John Black, also present were the Mayor and Mayoress of Coventry, Mr. C. J. Band, Mr. E. W. Martin and the Town Clerk of Coventry, Mr. C. Barratt, LL.B.
On entering the hall the party received an enthusiastic demonstration of welcome from the assembled ex-service-men. Sir John Black then addressed the guests from the stage. He thanked the Field-Marshal for coming and went on to say “we appreciate his interest in the welfare of those men and women who served under his brilliant command, and all of you, who, in other branches of the Services, helped to bring the war to a successsful conclusion.” I have always regarded my comrades of the first World War as the back-bone of The Standard Motor Company, Ltd., and I know they and you new members will spread the real co-operation, understanding and comradeship so vital in achieving the tasks that lie ahead.” He concluded by introducing the Field-Marshal who received a great ovation and spoke at length to the audience of 1,750 ex-servicemen.
The Field-Marshal’s speech, which included several anecdotes from his great campaigns, covered many interesting points, among which were his views on the necessity of obtaining the complete confidence of the men and women concerned to ensure success in any sphere. Speaking on this he said : “I am a very firm believer in that fact, and I have been study-ing this programme, your business, what you do, and I would say that it looks to me as if that great principle is very well understood here in The Standard Motor Company, that the great basic principle of all life, that it is the man that matters, and not only the machine. Now that is a very great thing to get right in this age of scientific progress and advance.”
During the course of his visit he took the opportunity of inspecting the Standard Vanguard and the Standard-built Ferguson tractor—both of which impressed him. Following the Field-Marshal’s address a concert by well-known artistes was held, a buffet being available during the interval. The event was extremely successful in all respects.
ARCHIVE: October, 1947
Sir John Black and Monty were very good friends, knowing to socialise together – and enjoying similar hobbies such as skiing and fine food and drink – ED