Details and research of those written on the Standard Motors Roll of Honour.
Alfred, John Mintern worked in the Service Dept. Standard Motor Co. prior to WW2.
Lance Corporal Alf Mintern, Service Number 7902740, served with the 2nd Dragoon Guards (Queen’s Bays) and was killed in action in 26th October, 1942.  He was 29. He is buried at EL ALAMEIN WAR CEMETERY, with 6,480 other casualties. 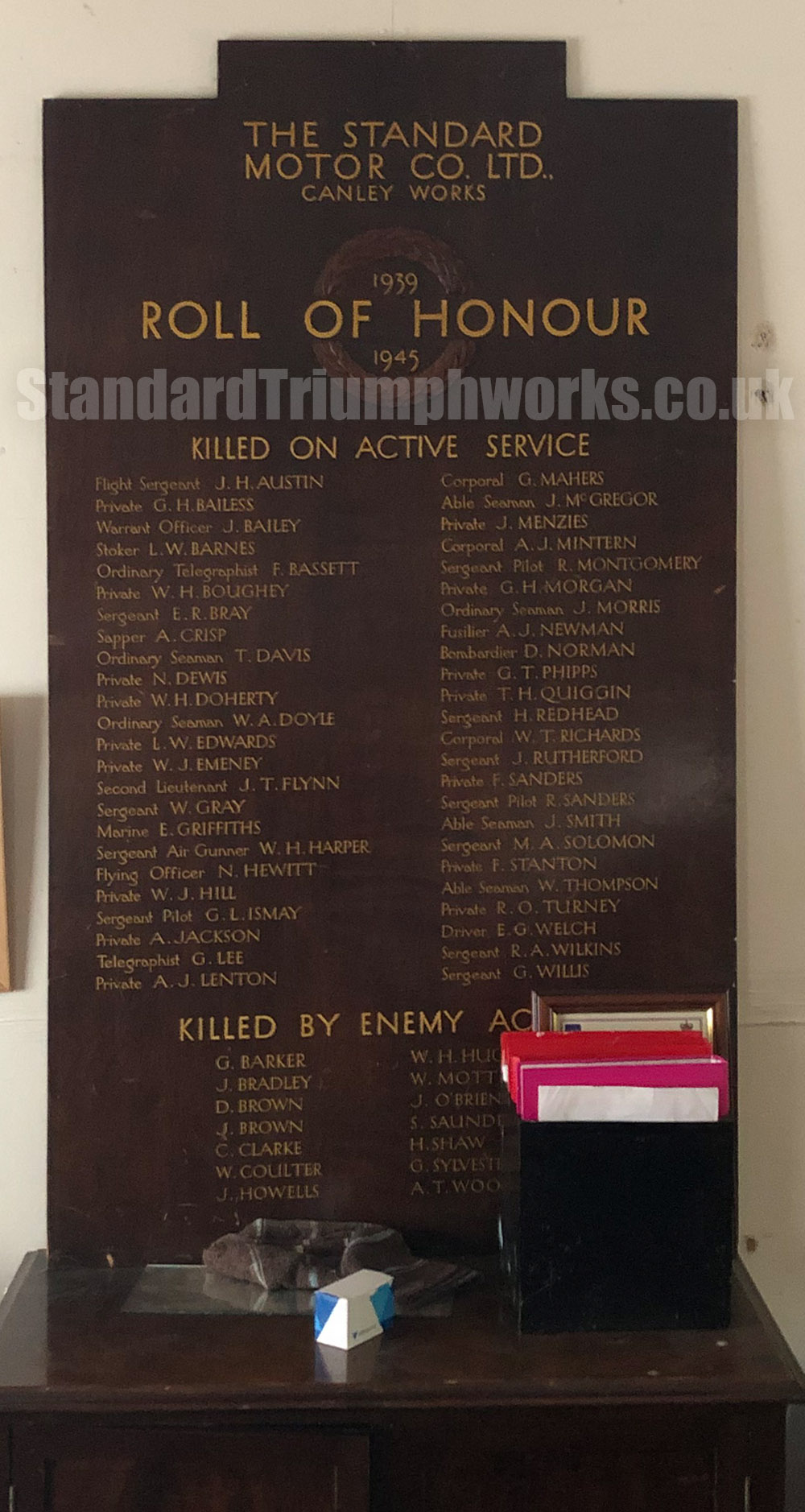 The photo is a closeup of the Roll of Honour wooden board taken in the 1960’s. It is clearly marked as Standard Motor Co Roll of Honour and is split possibly into First/Great and Second World War but what happened to this memorial and can we rediscover the names that were written on it?

The Standard Motor Co Roll of Honour. What happened to it? Does anybody know? Does it still exist? Please share this post to see if we can find it – or a really good photo – so we can remember Alf Mintern and his pre-war work colleagues who paid the ultimate sacrifice during the second world war.
Thank you.
UPDATE. BOARD FOUND and picture replaced.

William Henry Wilcox Boughey. Killed in action. Aged 26, he joined the Royal Warwickshire Regt. Territorials upon the out break of war, served in France, and was in the evacuation at Dunkirk. BEF Forces.
Private 5110298. 15 April 1944 Age 26 KOHIMA WAR CEMETERY Essex Regiment

(Sydney) Harry Shaw (Aged 47)
At the time of his death, Sydney was employed as a Fireman at a factory in Ansty, near Coventry, which assembled mosquito aircraft for the war effort. Having survived World War 1 with a shrapnel injury to his ankle, during World War 2 Sydney was injured whilst working at Ansty and was taken to hospital at Walsgrave and was killed during the Coventry Blitz when the Coventry & Warwickshire Hospital was bombed on 9th April 1941.
“Bombed at Walsgrave. He worked at Ansty and they were putting a propeller on an aeroplane. They got a big, like, well say spanner, I don’t know what you’d call it, and the man, the otherside to me husband, let his hand go, let his end go and it hit him in the eye. So,he came into Walsgrave Hospital. Now, when the nurse came to see me, as he were in there, came from Ansty. She said I feel guilty, she said because your husband was best in Coventry. If we’d have got a car then, he’d have said he wanted to go to another hospital, they’d have taken him to Rugby. On the night that I were there, the last night, I said I’ll try and get you out of here, get you transferred. I went for the matron but she were in the operating theatre and she couldn’t come, so I said well I’ll see you next…. I’ll see you next then. Ah I did. They were killed thatnightnurses, doctors, patients as well.” Elizabeth Shaw (Wife)