At the recent NEC Classic Car Show, we came across a colelction of A4 papers with numerous typed sheets amongst which is an interview with Harry Webster.The transcript – pages 1 and 2 are reproduced here, seem to follow a series of interview questions – with the questions not available. So as we go further into the document (in a later post) some of the questions may have to be worked out from the answers given. 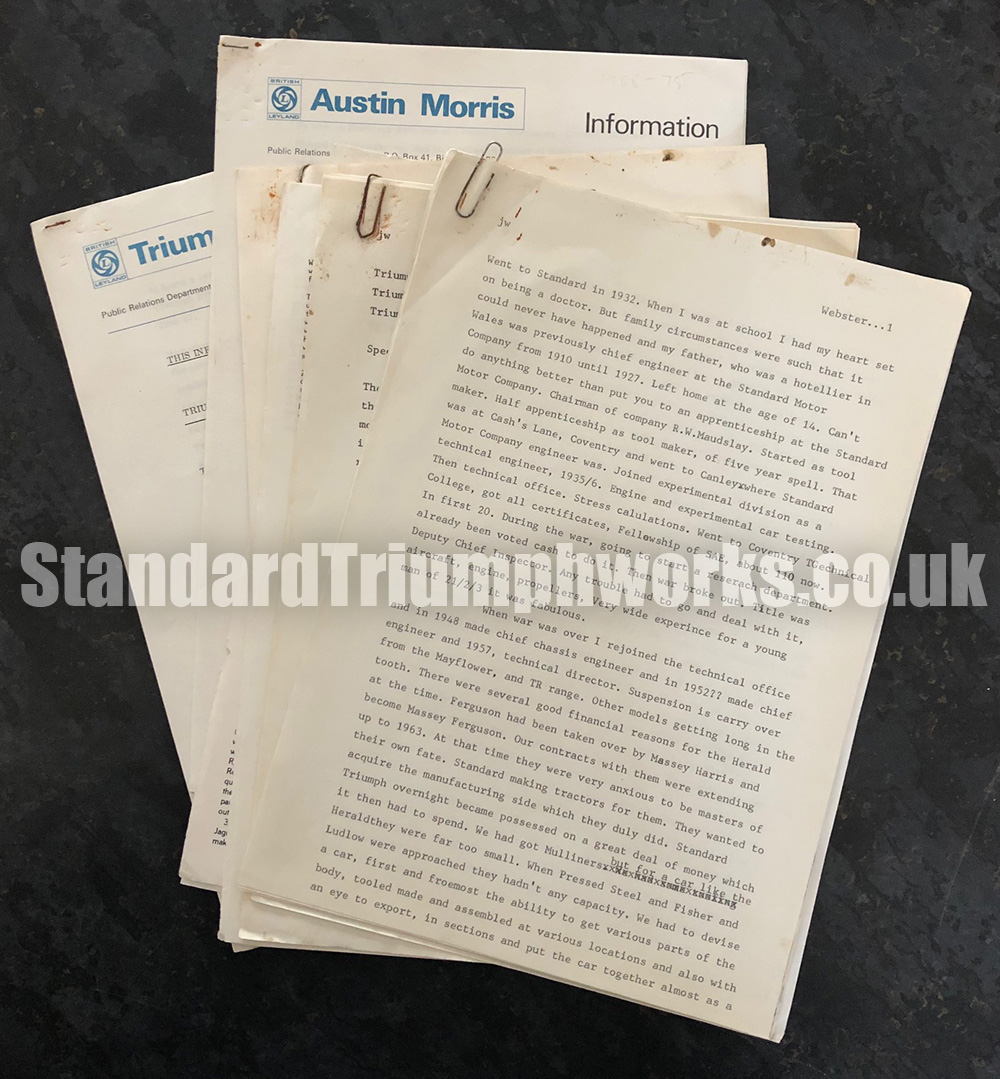 Currently the interviewer, or reason for the papers is not clear. Initial JW suggest the writer. Again interestingly the papers contain both Triumph and Austin Morris letterheads. Webster was director of engineering at Standard-Triumph for more than a decade. After the formation of British Leyland he was moved to Longbridge to bring order to the faltering engineering operation at Austin-Morris. Chief Executive Engineer at Leyland Motors in 1967 and replaced Mini-creator Alec Issigonis as the company’s technical director in 1968. Later became Head of Design at Austin-Morris division. Perhaps the papers came from Harry Webster himself?

The early papers briefly cover Harry’s early career and war work, and then go into more detail with the development of the Triumph Herald and his introduction to Giovanni Michelotti.

Joined experimental division as a technical engineer, 1935/6. Engine and experimental car testing. Then technical office. Stress calulations. Went to Coventry Technical College, got all certificates, Fellowship of SAE, about 110 now. In first 20. During the war, going to start a reserach department. already been voted cash to do it. Then war broke out. Title was Deputy Chief Inspector. Any trouble had to go and deal with it, aircraft, engine, propellers, Very wide experince for a young man of 21/2/3 it was fabulous. When war was over I rejoined the technical office and in 1948 made chief chassis engineer and in 1952?? made chief engineer and 1957, technical director. Suspension is carry over from the Mayflower, and TR range. Other models getting long in the tooth. There were several good financial reasons for the Herald at the time. Ferguson had been taken over by Massey Harris and become Massey Ferguson. Our contracts with them were extending up to 1963. At that time they were very anxious to be masters of their own fate. Standard making tractors for them. They wanted to acquire the manufacturing side which they duly did. Standard Triumph overnight became possessed on a great deal of money which it then had to spend. We had got Mulliners xxxxxxxxx.

Herald they were far too small. When Pressed Steel and Fisher and Ludlow were approached they hadn’t any capacity. We had to devise a car, first and foremost the ability to get various parts of the body, tooled made and assembled at various locations and also with an eye to export, in sections and put the car together almost as a jig to put it together. Main consideration was undoubtedly the fact that we couldn’t get a complete body made. Seven different organisations. They had masters fixtures xxxxxxxxxxxxx to make sure they came together correctly. It was purely force of circumstances. We had the construction worked out a long time before we had the body styling done. We had styling organisation of our own and they struggled for 12/18 months and tried to come up with a suitable style. We turned everything down. 56/7???. They weren’t what we were looking for.

Then a fellow came to see me one day who wanted to know if we would sell them chassis (Raymond Flowers for the Meadows Frisky micro-car – ED). I don’t see why not. For a small car. What’s it going to look like? Don’t know, he said. We’ll get a prototype made. How soon? Three months. I didn’t believe it. This resulted eventually in a sort of challenge. If you pay for it, I’ll get you a prototype done any time you like. Engines of Standard Eight floor pan. We would pay for one if he would get it done. £3000 would be cost. All he wanted from us was a built up chassis. They did it on TR2. We supplied chassis, door locks window winders etc. About 10 days after the challenge he came back with half a dozen drawings and said here’s some drawings, which one would you like? We chose and away he went and three months later he came back with a car. We found out just before finished wanted to see over there. Found out Michelotti in Turin. Had met at Motor Show but not registered. Struggling with face lifts on Vanguard and became known as Vignale Vanguard. In cohoots with Vignale at that time. ZOBO was code name. We’d got all sorts of numerals and code name for cars. Spec office chap came to see me after I took over and said we ‘re getting into one hell of a mess what are we going to do. I said go and take all the four letter words beg ring with Z, jokingly almost. And he came back. Its amazing how many there were. ZOBO in a Tibetan pack animal of interdertiminate sex, between a bull and a cow. Having seen what Michelotti could do we put him on a retainer of £3000 a year.