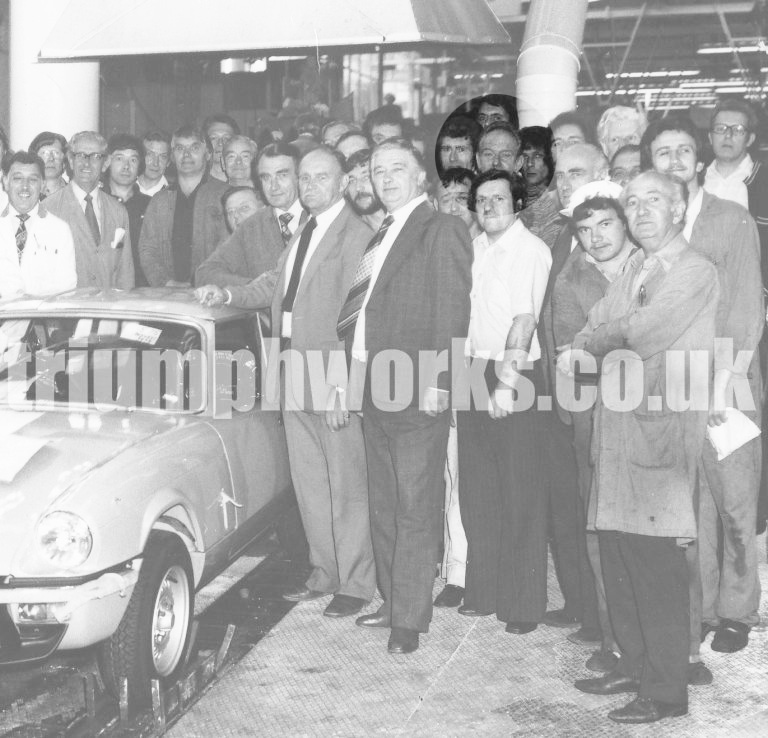 Ted had worked on the line for 15 years putting Spitfires and other Triumphs together, and felt a tremendous loyalty to the brand. In the early part of 1980 it was well known on the shop floor that production of the Spitfire would soon be coming to an end. Despite senior management being happy for production of the Spitfire to unceremoniously just peter out, Ted and a number of his colleagues felt that the end of Spitfire production should in some way be marked and it was there initative that led to the above photo being taken.

Ted recounts that they had originally requested that some sort of plaque be added to the dash of the last few Spitfire’s to celebrate the 18-year production run. Unfortunately no money was available for such PR. Undeterred, Ted and his colleagues were determined something should be done. Wanting to wish the cars a fond farewell, as a token gesture, small magnetic St. Christopher charms the size of a five-penny piece, were secretly placed in the petrol tanks of the last few Spitfires. The petrol tank was chosen because they knew that the charms would very likely remain there undisturbed for the life of the car. Ted can’t remember how many cars were treated to a St. Christopher, because production was very stop start at the end, but he does know they originally bought 100 St Christopher’s and that they definitely put one in the tank of last Spitfire they’re standing next to in the photo!
CLICK HERE for MORE about the full photo, names and the last Triumph Spitfire
Standard Triumph Works Archive