It was at the beginning of the year that at the instigation of Sir John Black, Mr. H. S. Weale (Production Director) left for U.S.A. together with Mr. F. K. Lord (Plant Manager), Mr. A. H. Hampson (Planning Engineer) and Mr. H. G. Webster (Chief Chassis Engineer). 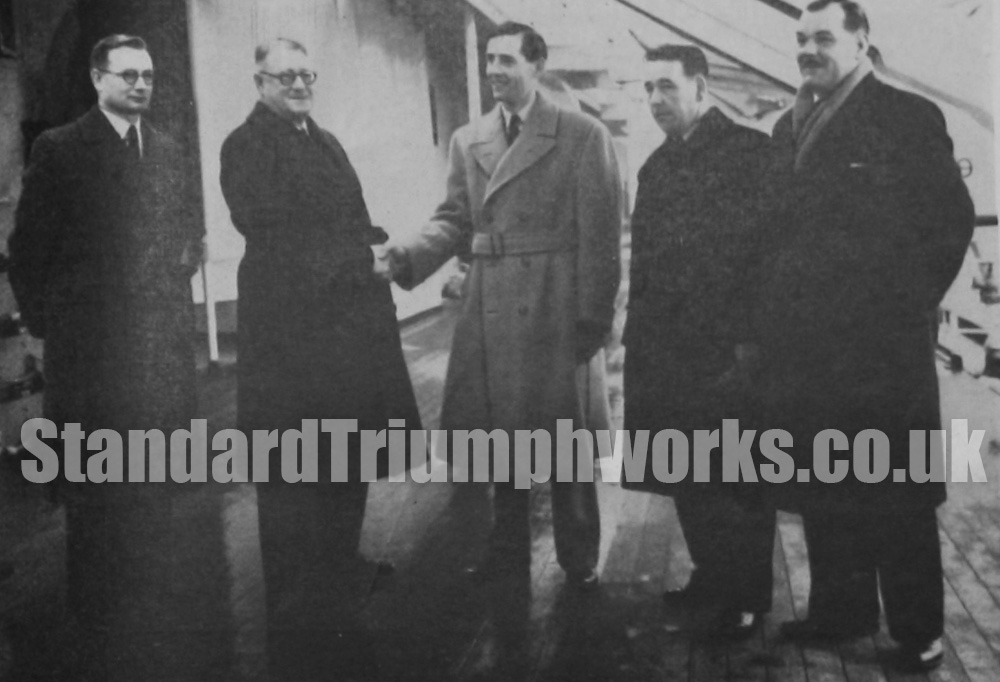 (L to R) Webster, Weale, Dick, tbc and tbc (One being Hampson, one being Griffiths).

They were accompanied by Mr. H. F. Griffiths, Planning Engineer of Messrs.
Fisher & Ludlow Limited. Our photograph shows their recent arrival back at Southampton in the Queen Mary, having been away a month and travelled 9,500 miles. Mr. Weale is seen being welcomed by Mr. Alick S. Dick, Assistant Managing Director, with the other members of the party, except Mr. Lord, on the sun deck of the ship. The primary object of their journey was to study the latest production methods in the larger American car factories. Mr. Weale and his team returned with the impression that America really does things in a big way, particularly from a car production point of view, but the material shortage is just as difficult to them as it is to us, largely due to the armament programme, and includes copper, zinc, lead and chrome.

They consider that as a result, American cars will shortly lose a lot of their chromium finish and may look almost utilitarian. Most of the plants visited were able to show very remarkable production figures compared with the largest factories in this country. For instance, one factory alone was turning out cars at the rate of 180 per hour off two assembly tracks. An interesting point, apart from production, was the fact that almost new cars were observed being sold at prices 200 dollars below list, a contrast with second-hand prices being obtained in this country. Another interesting point was the considerable weather changes that were encountered during the trip, temperatures varying between 62 °F and 10°F  below zero, i.e., forty-two degrees of frost.

Before returning, the party visited the Spares Depot of The Standard Motor Co. (Canada) Limited, at Toronto.