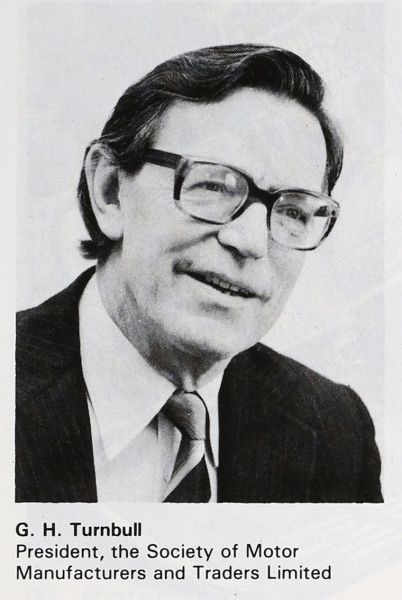 AS ONE of the British motor manufacturing sector’s outstanding executives, George Turnbull’s career inevitably followed the switchback fortunes of the industry. But latterly, as chairman of Inchcape plc, he had also played a key role in encouraging Toyota to establish its factory at Burnaston in Derbyshire, which produced its first car just six days before his death.

Although Turnbull’s father (Bart Turnbull) was apprentice supervisor at the Standard Motor Company in Coventry, he gave his son the option of choosing between engineering and the law. Young George decided to follow his father’s example and, in 1941, at the age of 15, he became a Standard apprentice. George had been educated at King Henry VIII’s School in the city and, once at the Standard factory at Canley, he won a scholarship to Birmingham University awarded by Sir John Black, Standard’s formidable managing director. Turnbull took a B Sc in mechanical engineering and, in 1956, was appointed in his 30th year to the demanding job of divisional manager, car production.

Alas, Standard Triumph’s progress was blown badly off course by a credit squeeze early in 1960 and, in 1961, it was bought by the commercial vehicle manufacturer Leyland Motors. The purchase became the first link in a chain of events that, in 1968, would lead to almost the entire indigenous motor industry being brought under the umbrella of the British Leyland Motor Corporation.

Standard’s new managing director was Leyland’s engineering supremo, Stanley Markland, who embarked on a programme of wholesale managerial sackings; but he was responsible for promoting Turnbull who, at 31, joined the board and was made general manager. It was an endorsement of Turnbull’s abilities and tough- minded approach to his job. In the 1960s, Triumph’s star, aided by the Herald car and the new 2000 model, was in the ascendancy, as was Turnbull’s, along with that of the company’s chief engineer, Harry Webster.

When Leyland effectively absorbed the ailing British Motor Corporation in 1968, Turnbull was destined for a high office within the new organisation. He did, in fact, take on what was arguably the toughest job in British Leyland: that of managing director of the Austin Morris division. It had been suffering from lack of investment, falling profitability and the brilliant but quirky approach of Alec Issigonis, its legendary technical director.

Turnbull oversaw the production of British Leyland’s first new car, the Morris Marina, in 1971, which was modestly well received and aimed four-square at Ford’s highly successful Cortina. But, in 1973, came the Austin Allegro, on which Turnbull had worked with his former colleague at Triumph Harry Webster, who was by then technical director of British Leyland. It was a car which, regrettably, never sold as strongly as the Issigonis-designed 1100/1300 range it replaced. A gimmicky feature at its launch was a ‘square’ steering wheel, an idea Turnbull had borrowed from the Rover SD1, then under development.

Much of Turnbull’s energies had been concentrated on the labour problems that were continuing to plague Austin Morris. He later reflected that in 1970 the division had only enjoyed two clear weeks without industrial action throughout the entire year. Yet David Andrews, a former colleague, recalled that Turnbull ‘was ahead of his time on communications, internally to managers and employees . . . and he was good at it’.

Turnbull then became a player in a power struggle within British Leyland concerning Lord Stokes’s eventual successor. While Turnbull was an obvious contender for the post, the other was John Barber, British Leyland’s finance director, who had held a similar appointment at Ford. Barber summed up their differences thus: ‘(Turnbull) was more of a ‘doer’ and I was more of a planner. Coming from Ford it was inevitable. I was pushing Stokes towards moving up market; George wanted to be a high-volume producer.’ Matters came to a head in May 1973, when Barber was appointed Stokes’s deputy and, in effect, his heir apparent.

Five months after Barber’s appointment, British Leyland announced that Turnbull had resigned from the corporation. To the surprise of many of his former colleagues, in 1974 he joined the South Korean Hyundai Motor Company on a three-year contract to establish a car-manufacturing facility there. His formidable brief was to get the first model, named the Pony, into production in a little over two years in a country with no motor industry infrastructure. The car’s styling was agreed in March 1974 and the Pony triumphantly went on sale in Korea in May 1976.

Turnbull completed his contract with Hyundai in 1977 and he then moved to Tehran where he joined the Iran National Motor Company which imported kits of the Hillman Hunter, built by Chrysler’s British operations. But in 1978 that business was bought by Peugeot Talbot and in 1979, after a five-year absence, Turnbull returned to the British motor industry as chairman of Talbot UK, as Peugeot had renamed its British subsidiary.

Once again he faced a demanding task because of a limited model range and a falling order book was exacerbated by the effects of the post-1979 oil-price-driven recession. Peugeot had inherited a factory at Linwood, near Glasgow, which had been opened by Chrysler’s Rootes Group predecessors in 1962. The works had a troubled history. The Hillman Imp had never achieved its expected sales and there was an unhappy legacy of poor labour relations. In 1981 Peugeot decided to close Linwood and it fell to Turnbull to shut the plant.

Turnbull remained with Peugeot until 1984 when he left the motor industry for the City and the Inchcape investment company. He became its chairman and chief executive in 1986, brought in a new management team, and businesses within the group were slimmed down from 30 to 10. Pre-tax profits rose from £85.6m in 1986 to £185.2m in 1991, the year of Turnbull’s retirement. One of the companies in Inchcape’s ownership were the distributors Toyota (GB), and Turnbull, with his practical experience of the motor industry in the Far East, was well qualified to play a leading role in encouraging the Japanese company to establish a factory here.

Always a keen sportsman, George Turnbull was a good rugby player as a young man and captained Warwickshire for three seasons. He was also an enthusiastic golfer.