On the day prior to the public announcement of the Vanguard III which appeared in most national and provincial papers, The Standard Motor Co. Ltd. invited all Standard Distributors and representatives of the Press to a luncheon held at the Banner Lane Factory to celebrate the occasion.

A part of the main works canteen had been curtained off to form a reception lounge and a luncheon room. In the latter, tastefully displayed, was a 1906 six-cylinder Standard (the property of Lamb’s Ltd). On the far side was the first Standard Vanguard, looking as resplendent as it did when it was first shown at a similar function in 1947. Between these two displays was the stage on which, concealed by venetian blinds, was the new Vanguard III, to be unveiled later by the Chairman, Lord Tedder, who, at the correct moment, pressed a switch which instantly raised the venetian slats and revealed the new car, while a moment later the blind was completely raised for all to see clearly the splendid new car.

Mr. Alick S. Dick, Managing Director of The Standard Motor Co. Ltd., said in his speech that within eight weeks the Company would be producing 200 of the new Standard Vanguard III Saloons a day. Referring to sales, Mr. Dick said : “We have in the past ten years, in cooperation with Massey-Harris-Ferguson, been developing first-class distribution to provide adequate service and spare parts facilities for owners of both cars and Ferguson tractors throughout the world, and we are continuously trying new methods to improve this side of our business. ” In the financial year ended August 31st this year the record number of 169,556 cars and tractors were manufactured and sold, compared with 134,000 last year. Of this total, 55 per cent went abroad. They were worth £33 million.

“Cars numbered 98,647—an increase of one-third over the previous record figure.” Lord Tedder, Chairman of The Standard Motor Co. Ltd., told of the team work spirit within the factories. ” Every man and woman in these shops—each and every one in his or her own way—has made the achievements of the last year possible.”

“Making revolutions,” declared Lord Tedder later in his speech, “is not a British method. We should be British, make British and sell British. We do have revolutions, but we do not make them ; we evolve them, I believe, whether in politics, science or engineering ; that evolution is the sounder method.”

Mr. E. G. Grinham, Deputy Managing Director of The Standard Motor Co. Ltd., described the technical development of the Vanguard range. He also urged a reduction in the cost of materials. Of the future, he said : “We have our backroom and our backroom boys here. We have automatic transmissions, disc brakes, gas turbines, plastic bodies and hydraulic suspension here. These will be introduced when we are satisfied with them.”

Mr. J. A. Harrison, Editor of The Coventry Evening Telegraph, referred to the Company’s part in bringing prosperity to the City of Coventry. He added : “The Standard Motor Company has a fine reputation as an employer of labour because it provides conditions which are not surpassed in any other industry.” 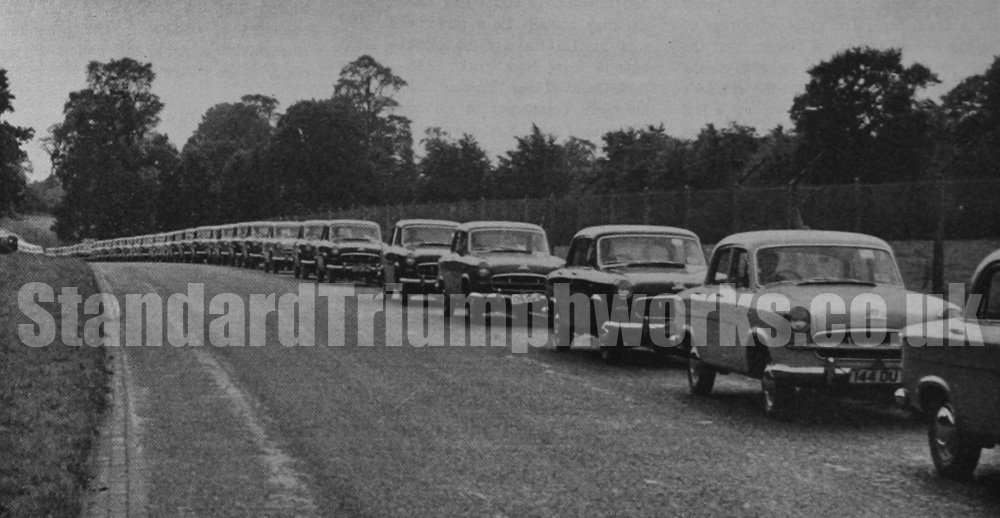 Mr. S. H. Newsome, Managing Director of S. H. Newsome Ltd., Standard Distributors, proposed a toast to the continued prosperity of The Standard Motor Co. Ltd. All present spoke with great enthusiasm of the new car. A fleet of cars was available for all Press representatives who had not previously had an opportunity of trying the car, and there was a car for every distributor present to take away after the function.